In 2021, Singapore new launches in the Core Central Region (CCR) stands out with excellent performance this year. Investors have been hunting for apartments in projects in CCR such as Irwell Hill Residences, Midtown Modern and Jervois Mansion, which are ranked among the top 10 open for sale by percentage of sale. According to Lee Sze Teck, research leader of Huttons Asia, Super luxury projects such as Park Nova and Les Maisons Nassim have sold apartments at standard prices.

Park Nova is one of the high-end Singapore new launches with 54 units, has sold 32 units (59%) with an average price of US$4,844 and Les Maisons Nassim sold three units with an average price of $5,930 US/psf, one of which is a super penthouse that hit a new record $75 million or $6,210 psf. On the other hand, Jervois Mansion, which sold all 101 of the 130 units released, was well-received due to its attractive price (average price is $2,578 psf). High-capital individuals or investors are looking for value in Singapore's luxury market, Lee said, with a business-friendly environment coupled with a high quality of life and vaccination rates that continue to attract attention. wealth comes to the city. Relatively low taxes are another plus. 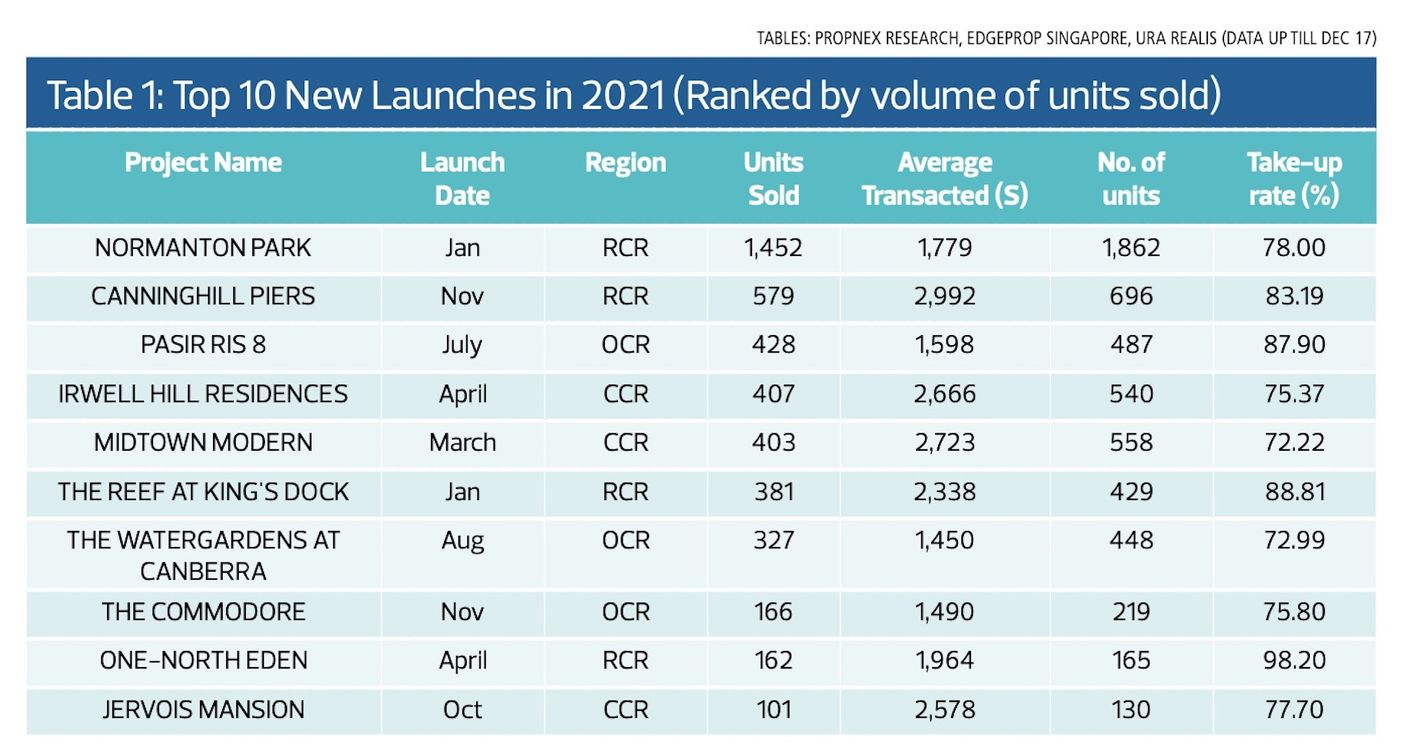 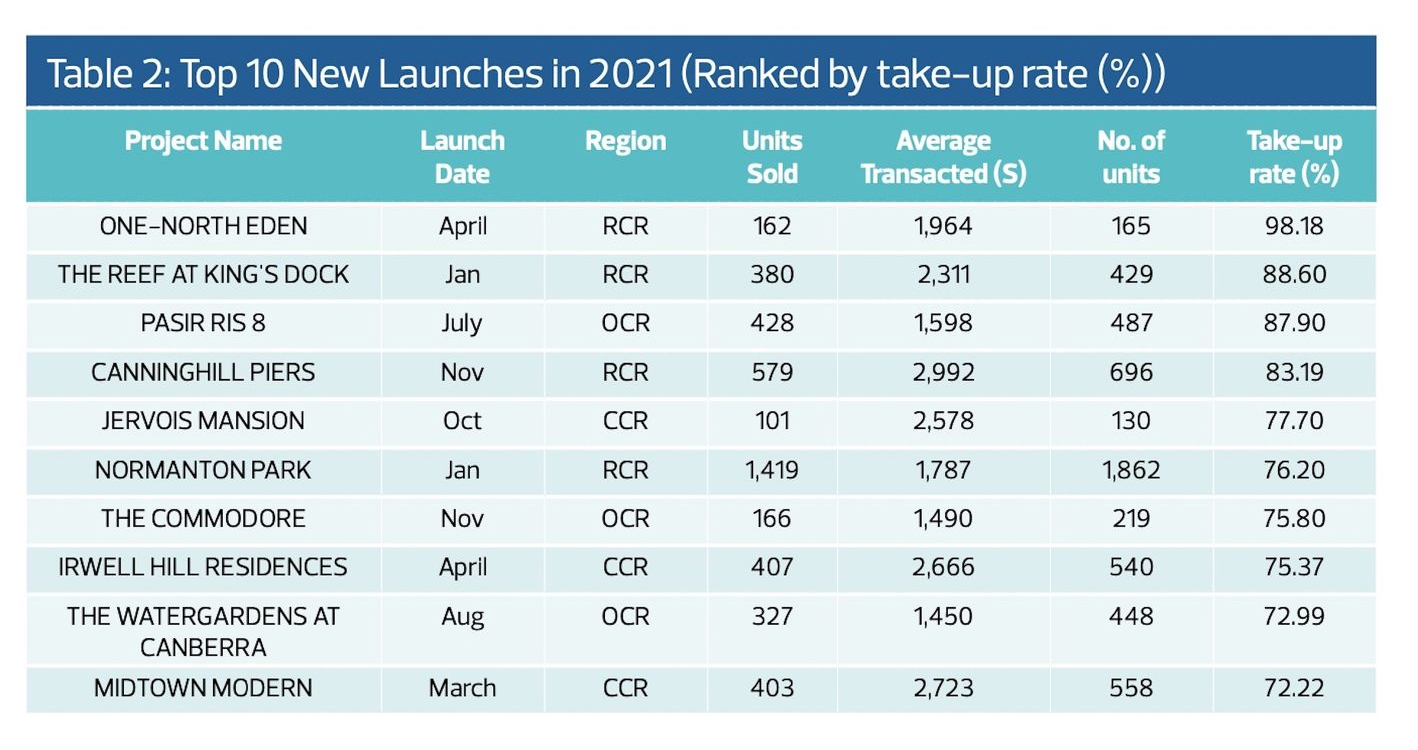 Some outstanding new Singapore launches in the year

One of the prominent Singapore new launches in the city center is Canninghill Piers - the project kicked off in November and has sold 579 units (83%) with an average price of $2,992 psf to date. Its super penthouse is priced at $48 million ($5,360/m2), making it the second-highest penthouse sale this year. According to Ismail Gafoor, CEO of PropNex, the prime location of Canninghill Piers in Clarke Quay and its distinctive features has proven attractive to locals and ex-pats alike. 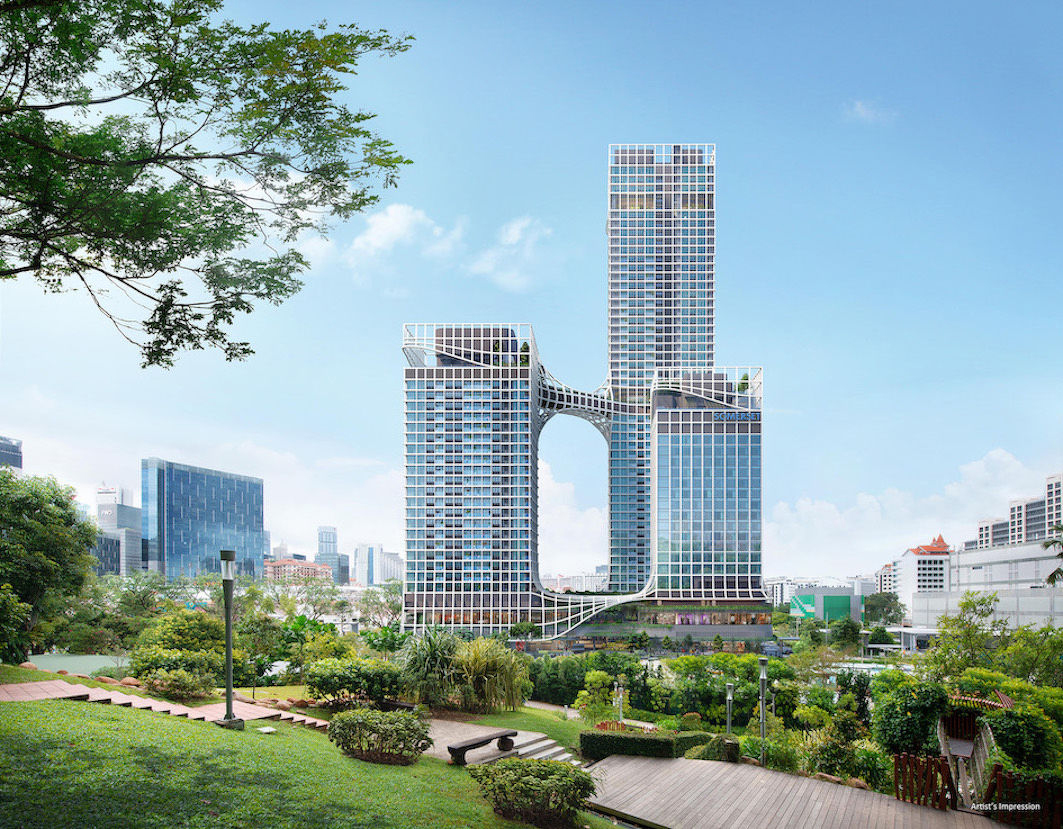 CanningHill Piers is 83.19% sold making it the third best-selling Singapore new launches in 2021

One of the Singapore new launches on the edge of the city or the Rest of Central Region (RCR) is Normanton Park - the first new launch project of 2021 and the best-selling project of the year. As of mid-December, the project has sold 1,452 out of 1,862 units, representing a sale rate of 78% at an average price of $1,779 psf. In the Outside Central Region (OCR), Pasir Ris 8 is a project consisting of 487 apartments, considered one of the important projects that sparked a wave of suburban housing purchases. This project has sold about 88% of total apartments, equivalent to about 428 residential units with prices above $2,000/psf. 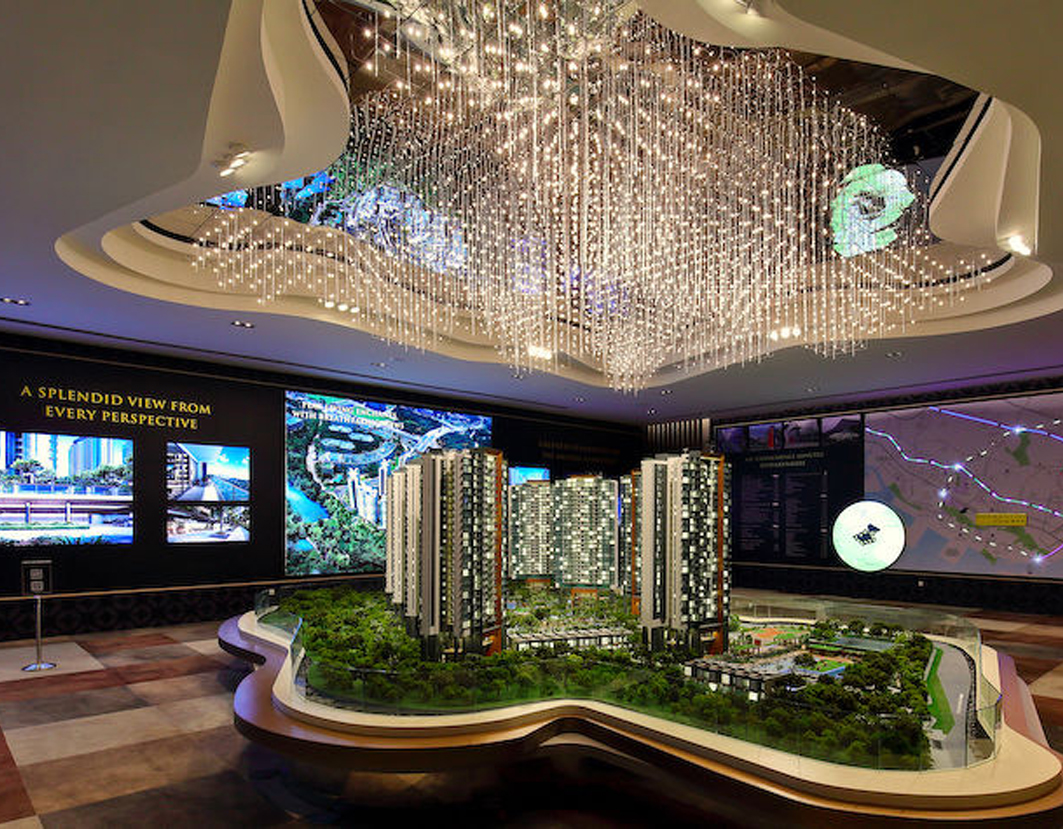 Discover more about Normanton Park Details here and contact us to receive more attractive promotions from the developer!

Expert opinion on the sales situation of Singapore new launches at the end of 2021.

According to Huttons' Lee, the need to buy a house in 2021 comes from people needing a larger space to be able to work and study at home. Bringing in liquidity from their profits in the financial markets, buyers turn to focus on a physical asset like an asset for a steady return.

Gafoor further noted that it is unlikely that sales in December will be higher than the previous month. Mori is one of a number of Singapore new launches that have just opened for sale in the first weekend of December, with 45% of the total 137 units sold. In addition, the last two launches in 2021, the 34-unit Zyanya store development at Lorong 25A Geylang by local construction company Boldtek Holdings, have announced that the official launch will take place on March 1, 2020. December 18; and luxury condominiums, the 230 Perfect Ten units in Bukit Timah, District 10, owned by Hong Kong real estate group CK Asset Holdings, are scheduled to launch on December 19. With supply dwindling and new properties, With the new property cooling measures in place, Gafoor expects new home sales to moderate around 9,000 to 10,000 units next year and private home prices to increase by about 3% to 5%, in line in line with Singapore's GDP forecast for 2022. 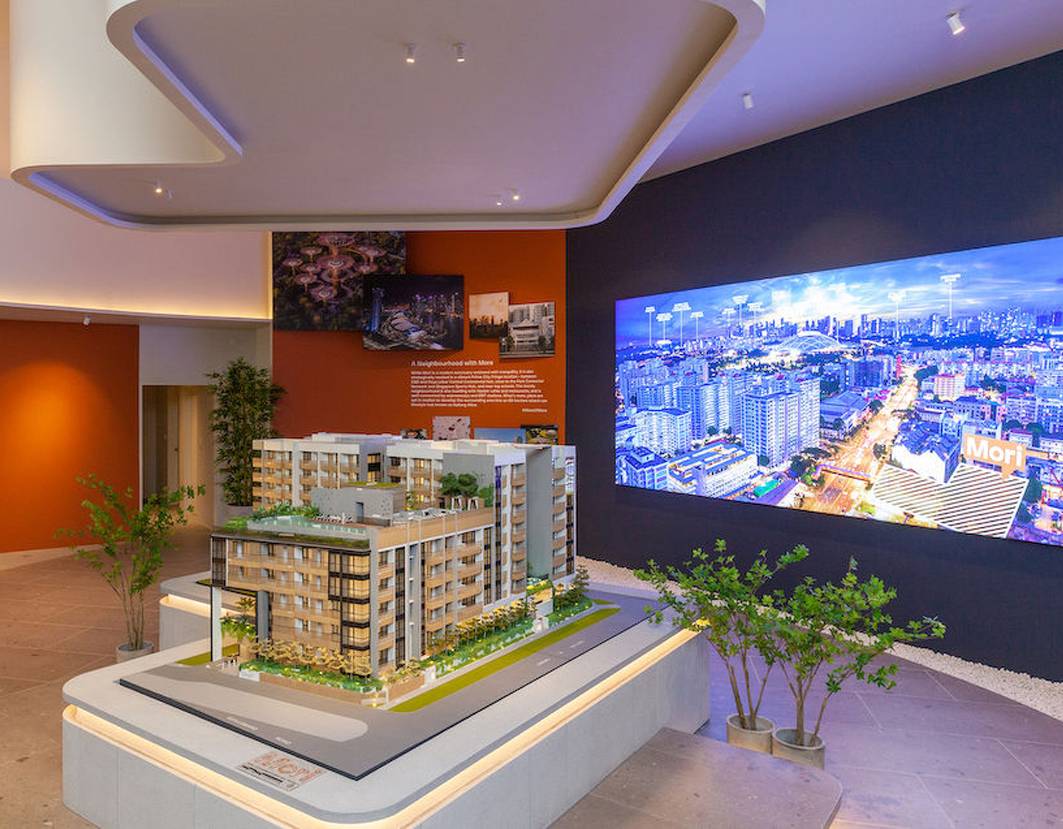 For more latest news about new launch condo developments, don't forget to follow our website and sign up with your details below avail of great discount deals when you buy your very own unit!